First off I want to wish a huge happy book birthday to Right Behind You by Lisa Gardner. This book releases TODAY 1/31/17! I can’t think of a better way to end a month then by releasing an amazing psychological thriller. This is book #7 in the Quincy & Rainie series by Lisa Gardner, but I can honestly say it reads like a standalone. I had no clue it was a part of a series until I was almost halfway through the book and decided to look it up on Goodreads. Thank you to Dutton Books for sending me an advance copy.

Eight years ago, Sharlah May Nash’s older brother beat their drunken father to death with a baseball bat in order to save both of their lives. Now thirteen years old, Sharlah has finally moved on. About to be adopted by retired FBI profiler Pierce Quincy and his partner, Rainie Conner, Sharlah loves one thing best about her new family: They are all experts on monsters.

Is he a killer?

Then the call comes in. A double murder at a local gas station, followed by reports of an armed suspect shooting his way through the wilds of Oregon. As Quincy and Rainie race to assist, they are forced to confront mounting evidence: The shooter may very well be Sharlah’s older brother, Telly Ray Nash, and it appears his killing spree has only just begun.

All she knows for sure: He’s back.

As the clock winds down on a massive hunt for Telly, Quincy and Rainie must answer two critical questions: Why after eight years has this young man started killing again? And what does this mean for Sharlah? Once upon a time, Sharlah’s big brother saved her life. Now, she has two questions of her own: Is her brother a hero or a killer? And how much will it cost her new family before they learn the final, shattering truth? Because as Sharlah knows all too well, the biggest danger is the one standing right behind you. 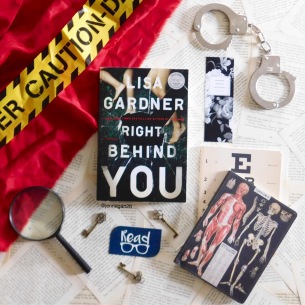 I literally just turned the last page of this book, and I’m still trying to rap my head around the ending. WoW! Definitely not what I was expecting AT ALL. Like I stated before I had no idea this book was part of a series before I picked it up. That being said, I now have to read all the books before this one because I seriously loved each character. I know this book had a lot of new characters added for the storyline, but Quincy and Rainie stole my heart from the first page.

The book opens on a scene from the past. Some of it is hard to read knowing that two innocent children had to go through that trauma. But, it is essential to the story. Throughout the book certain chapters skip to the past, whether the recent past or almost a decade ago. Slowly these flashbacks come together to mesh with the present as we know it. I started guessing from the first chapter as to where the book was going, and I was dead wrong but in the best possible way.

As the past trauma and present crimes start to come together you don’t want to believe what you think is the truth. My heart hurt for Sharlah from page one. Her confusion about her brother and the ramifications of her parents death leave her distrusting everyone. At times she is more grown up than thirteen year old., but through it all she is the perfect fit for Quincy and Rainie.

I loved the profiling aspect of the book. I haven’t read many books where the main characters are FBI profilers or profilers in general. It brought a completely different feel to the thriller which is another reason why I can’t wait to read the rest of the series. This book is a wild ride of emotions and adrenaline. It kept me guessing to the very end and I still got it wrong! Best type of book in my opinion and the main reason I rated it 5 stars.

2 thoughts on “Book Review – Right Behind You by Lisa Gardner”